More than 126,000 people globally have now been confirmed to have contracted the coronavirus, out of whom 67,000 have recovered, and more than 4,600 have died, according to the Johns Hopkins University Center for Systems Science and Engineering.

Clinicians got better at treating people with the disease

During the first wave of infections in Wuhan, the Chinese Center for Disease Control and Prevention analyzed data from 44,672 people who had the virus. This research showed that 80.9% of patients experienced mild symptoms, 13.8% required hospitalization and experienced severe symptoms, and 4.7% were critical cases requiring intensive care.

Chinese medical authorities appeared to get better at treating infections and preventing death as the outbreak proceeded. “Even the first and hardest-hit province, Hubei, saw its death rate tumble as public health measures were strengthened and clinicians got better at identifying and treating people with the disease,” Vox’s Julia Belluz explains.

Coronavirus around the world

Although Covid-19 has spread to 116 countries, the vast majority of cases have been confirmed in Wuhan, the capital of Hubei province in China, where the pandemic originated. Taken with the 110,000 cases in Italy, Iran and South Korea, this amounts to 87% of cases in total.

The rate of infection in Italy has been observed to be similar to that of Hubei. The extraordinary efforts of the Chinese state to contain the virus seem to have slowed the spread of the disease in a population used to authoritarian government. Italy’s government has ordered all shops, bars, and restaurants across the country to close and has restricted travel in order to slow the outbreak.

Read Also: Over 15 Million People Under Lockdown as Italy Tries to Contain Coronavirus

Recovery depends on the immune system

The largest European outbreak is in Italy, where 23% of the population is aged over 65 and where 6% of cases have resulted in a fatality. Major outbreaks are also occurring in South Korea and Iran where there are fewer older people.

Thousands of people affected by the coronavirus globally have already recovered. As Covid-19 is a viral illness, antibiotics are of no use and neither are antiviral drugs that work against flu.

Recovery depends on the strength of the immune system and many of those who have died were already in poor health. The World Health Organization recommends people take simple precautions to reduce exposure and transmission.

The symptoms of Covid-19 vary from case to case, but the most common ones in China, from February data, are fever and dry cough (which are each seen in a majority of cases), fatigue, and sputum (the technical term for thick mucus coughed up from the respiratory tract). If you have a fever and dry cough, that could be a good reason to get yourself tested if possible.

Coronavirus VS other viruses

Why canceling events and self-quarantining is so important

The key is to “flatten the curve”: slowing the rate of increase in infections so that you spread out the cases, even if the total number doesn’t change. Flattening the curve slows the rate at which new cases arrive in hospitals, easing the burden on health care infrastructure and improving the odds that individual patients will survive.

Warnings to avoid crowds, and cancellations of major gatherings like conferences and parades, have put a damper on travel in the US, and the consequences for airlines have been dire. According to Earnest Research, spending on airlines fell 16.5 percent in the last week of February relative to a year prior. Cruises have seen a similar dip, while hotels are only now starting to see sales mildly decline.

Coronavirus is more deadly than the flu

The following chart compares COVID-19 death rates by age in South Korea as of Thursday with death rates from the flu in the US over the course of the 2018-19 flu season, based on US Centers for Disease Control and Prevention data. 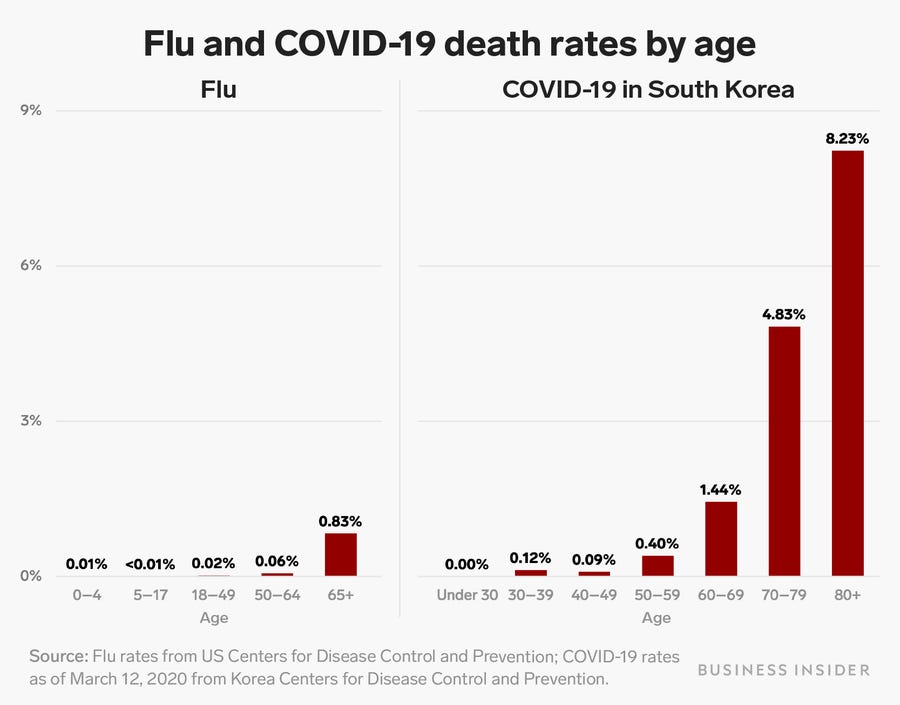 The comparison makes clear that even given the lower death rates in South Korea, COVID-19 is still a far more dangerous disease than the flu.

Comparisons between COVID-19 death rates in other countries and death rates from the flu are similarly stark.

Life on Mars Was Destroyed One Million Years Ago

Why After Hurting Finger We Put it in the Mouth?

This site uses Akismet to reduce spam. Learn how your comment data is processed.

12 Signs That You Have a Hater

36 Questions That Threatens With Falling in Love on The First...

6 Signs That He Needs Only Sex From You

How to Pack Your Hand-Luggage Smart

Plane Crash Psychology: Why Do We Save Our Luggage Not Each...

4 Wonders of The Underwater World